“We didn’t think about the logistics. We just cared about getting like-minded people working on something to see through our vision.”

That’s Mike Zarin explaining how the four members of Gone Is Gone came together to record one of the most distinctive debut albums you’ll hear this year. It’s called Echolocation and follows the release of the band’s self-titled EP this past summer. It’s also a giant step forward for a group only beginning to flex its creative muscle. And yes, Echolocation is only the beginning.

Gone Is Gone is a new band, but it’s not. It began a few years back, a joint project by film composer Mike Zarin and drummer Tony Hajjar of At The Drive-In. Introduced by a mutual friend, the pair first joined forces to create film music for Zarin’s music production company, Sencit. It was instrumental music intended for film trailers—music that was very well received within the industry. So much so that they recorded more, which was equally well-received.

“We started just writing,” recalls Zarin. “And we expanded the style—within some sort of sub-genre—and we had this one particular song that people kept using. Then they started asking us for more like this song. And we were like, ‘We think we stumbled onto a sound here.’

They brought in guitarist Troy Van Leeuwen, a friend of Hajjar’s who’s  known for his work with Queens Of The Stone Age, A Perfect Circle, Failure, Eagles Of Death Metal, Sweethead, and much more. “We played him the music we’d been doing,” says Zarin. “‘We want to start a band like this,’ we told him. ‘Let’s do this.’” “And he’s like, ‘Cool, man, that sounds awesome.’”

Zarin, Hajjar and Van Leeuwen then hit the studio, “just jammed for a week,” and began putting together the blueprint for a band. It was a methodical process: the trio would lay tracks down in the studio in the morning, then Van Leeuwen would leave in the afternoon to mix and track the current Queens Of The Stone Age record.

Then the finishing touch: the addition of Troy Sanders, bassist and vocalist for multi-Grammy  nominees Mastodon, who was sent rough mixes of the initial EP instrumentals. “He was on board right away,“ says Zarin. In an interview with Billboard, Sanders, who came up with the name Gone Is Gone, remembered “getting the call.” “I was standing in line at the DMV in Atlanta and my phone rings, and it’s one of my musical heroes, Troy Van Leeuwen. That was a phone call that just threw a giant rainbow into the miserable DMV environment where I was standing. It was almost like the stars aligned to make this band happen.”

The resulting EP caused a critical stir upon its emergence earlier this year, not just for its powerful opener “Violescent,” but for its inspiring cinematic feel and what the star-studded lineup of Gone Is Gone seemed to represent.  Words like “supergroup” popped up in more than one press account.

“We were pretty bummed, but it was inevitable,” says Zarin. “We understand. It’s a catchphrase, it’s a buzzword. Buzzwords are inevitable. And if it’s something we control, we would never call ourselves that. We’re musical friends with an artistic vision and commonality. Are we supergroup? No. Do we see ourselves as better or more important than other groups? Hell no.”

Though there was a much-buzzed about live performance at L.A.’s Dragonfly in April, Gone Is Gone thereafter focused not on the road, but on making a debut album that would take their initial EP a step further. Echolation does precisely that: It’s a powerful, emotionally tugging statement that captures the drive of each musician in a stunning manner.

“It’s a true four-person collaboration,” says Mike Zarin. “Troy Sanders was involved from the beginning. For the EP, we had songs done, then he lent his vocals. But the four of us did the music on the album. So the album is really well rounded in its sonic palette. We were able to expand on ideas that we were encroaching on the EP and just really build on them. We sort of finally all got it. We clicked. ‘This is what this is going to be.’ And that’s the biggest difference.”

How would Gone Is Gone define the music they make? Is there a category they feel comfortable with, a slot that works for them? Probably not.

“Experimental hard rock?” offers Zarin. “I love metal, I fucking love metal. But we are not that. We’re rooted in big downbeats, but we really like big downbeats, and riffs too, just by nature. We write what comes naturally to us. We’re not forcing something. And if someone comes with a riff and it’s pretty heavy, but it’s really cool, and they’re really into it, we’re going to embrace it. And then pull different influences.”

That Gone Is Gone’s roots are so unique, that their development comes from that creative, still burgeoning zone where music, film and multimedia joyfully collide in the studio, means that they are not like most other bands. “We’re not beholden to record/tour/record/tour,” says Zarin. “For us it’s write/record/experiment/write/record/experiment. We’re laying the groundwork to do different things. Whether it’s scoring a film, or just creating a tool kit for a filmmaker to use within their film, or an interactive experience. There are a lot of music artists that work with visual artists in a gallery space where they have audio and visuals connected. And we want to bring that to what Gone Is Gone has done.”

“Our plan is to take a more experiential, out of the box approach to bring our music to the listener and the audience,” says Mike Zarin. “Are we going to play shows? Yes. Are we going to hit the road for three months at a time? No.”

To Zarin, the beauty of Gone Is Gone lies in the band’s roots, “the old trailer-cinema functionality of music, paired with emotional captivation. We want to package that in a way that’s not traditional. And that’s really it. That’s the bottom line.”

So there’s something special at work in the music of Gone Is Gone. It was evident in their earlier EP, it leaps out of the speakers with Echolocation, and it’s noticeable in any discussion with Mike Zarin. This is a group that’s deliberately embracing art and sound and the user experience first and foremost. You can hear it in their music, and on every track of the new album. It’s an interesting place for any band to be.

“We feel like this is our opportunity, because we aren’t relying on it,” says Zarin. “This isn’t our day job, so to speak. We have that ability to focus on this.” 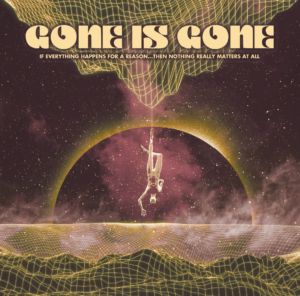