Shakespeare called it “outrageous fortune”, that malevolent confluence of events that throws our best-laid plans into disarray. Such a once-in-a-lifetime force majeure has been wreaking its chaos upon the whole world for the last 18 or so months. But these traumas and tragedies can still bear powerful, profound fruit.

So it is with the new EP from Boston Manor. Their fifth EP release to date, and the follow-up to their third album, 2020’s Glue, it marks a concerted step into the future for the Blackpool-born outfit. It’s the coining of a bold, bright new sound, building upon the bruising pop-punk of their earlier work, the big moves of Glue, to compose music that’s both heavier and more unabashedly accessible than that which preceded it. Hook-laden, coherent, blackly witty and with a molten emotional core, it’s the opening of a new chapter, hinting at even greater brilliance to follow. And it very nearly didn’t happen at all.

The story begins in May of 2020, with the release of Glue. Boston Manor’s third full length is a confident progression, and the group had planned to follow its release with a heavy cycle of touring across the globe. Of course, fate had other ideas – the pandemic hit, the group were grounded, and this landmark entry in the narrative of their career dropped without the opportunity to bring it to the people.

“It was just, like, nothing, for so long,” remembers vocalist Henry Cox, of the weeks following Glue’s release, the disappointment, the stasis, the disarray. “We got in the funk of it. And not the good kind of funk.” Denied the opportunity to tour their new album, to get under its skin, the band instead began work on a follow-up, somewhat ahead of their typical schedule. But again the new reality played its cruel trick, and nascent trips to the creative well saw them coming back empty.

“We usually spend ten months of the year in each other’s company, and in playing our latest material before audiences, we get a sense of what works,” Cox explains. But this time, forced off the road, they didn’t have hours in the tourbus to work on new riffs and ideas, to shape them in soundcheck, to get an organic sense of where the muse was taking them. And Cox was based in Salford, an hour away from his bandmates in Blackpool – though there might as well have been an ocean between them, at the height of lockdown’s heavy manners. Face-to-face writing sessions were out of the question, and attempts at doing the work remotely were absent the fire that roared when all five members were in the same room together.

“2020 was a write-off,” Cox sighs. “There was a period where I didn’t speak to anyone in the band for a whole month. We were all really quite depressed. Everything was really uncertain.”

Their future seemed to be slipping out of reach. And if they’d been talking to each other, there’s every chance that one member of Boston Manor might have verbalised the awful fear they were all feeling. For while anyone who has cast an ear to the very appositely titled Desperate Times Call For Desperate Pleasuresn their debut recording with new label Sharptone Records, will already surmise this as the darkness that precedes the dawn, in this moment Boston Manor couldn’t shake the sense that their group was done.

But giving up has never really been in Boston Manor’s nature. The group formed in 2013, before the social media age. “It was such a different landscape,” says Cox. “Back then, the only way for people to discover your band was through playing shows.” No easy feat in a city without any appropriate venues where a fledgling pop-punk band might cut their teeth. “We played one of our first shows above a pub in Blackpool,” adds Cox, “and that was our last hometown show. There’s never been anywhere to play in Blackpool.”

The absence of a local scene only inspired guitarist Mike Cunniff to invest in an old Post Office van, in which the nascent Boston Manor traversed the United Kingdom, playing shows wherever they could find them: squat parties, basements, DIY shows, punk clubs, anywhere with four walls and a ceiling they could spray with blood, sweat and noise. They were tireless, spending every moment they weren’t at university or working day-jobs in that van or in rehearsal or on-stage. And while this toil didn’t score them the press attention or record deals offered to the contemporaries they befriended touring the country – which their chalk up to being based in Blackpool, far from London and the music industry – it did win them the respect of local promoters across the UK, who recognised what a once-in-a-lifetime thing Boston Manor had going on, and would book the group as support when big US bands came to town, knowing that they would always deliver. “Manchester, Preston, Norwich… we were like the ‘local owners’ in cities we weren’t local to,” laughs Cunniff.

When, several months in, a big record deal had yet to materialise, Boston Manor self-released their debut EP, pressed up on home-burned CDRs. It was 2013, and Here/Now pushed over the first piece of their domino run of a career. Momentum built, and soon they found themselves playing DIY shows in Italy, and squat parties in Germany, and stepping on the lowest, lowliest rung of the ladder in America, putting in the hours and the grind. They were trying to figure out how to last five days in Paris with literally no money to their name, sleeping curled up on the bus through freezing cold nights in remote parking lots. They were together, discovering the kind of band they wanted to be, and how much work it would take to make it as the kind of band they wanted to be. They knew they were up to the challenge.

Their biggest test came in that moment in late 2020, when their song-writing sessions were coming up empty, when their frontman was stranded an hour from his comfreres, when they seemed to run out of road. And if it was only faith holding them together in those darkest days, it was a faith that would be suddenly and unexpectedly paid off when Cunniff emailed Cox demos for ten new songs he’d just written. Unlike the false grails and dead ends their recent sessions had turned up, these tracks lit a fire within Cox. “I hadn’t spoken to Mike for weeks and weeks, and usually we’d talk every day,” Cox remembers. “I didn’t feel like I could write songs anymore – it just physically wasn’t happening. And then these songs just appeared in my inbox at the end of January 2021. And I was like, ‘Fuck!’ They really pulled me out of my slump. I called him, I said ‘Leave it with me’. And then I didn’t speak to him again for a fortnight. I wrote songs to all of these demos, recorded rough vocals, and sent them back to him. And from there, we clawed ourselves out of this pit we’d found themselves in.”

What followed was what Cunniff describes as “the most joyful writing sessions we’d ever had”, as they worked through the demos and came up with the five songs they intended to release as their next EP. For these new songs, Cunniff says he was tapping into “the stuff I listened to in the late 90s – the Cardigans, the Cranberries, later-era Depeche Mode”. This last influence comes across clearest on the tracks of Desperate Times, in their sheen, their succinct pop sensibility, and the oceanic darkness hiding beneath.

This ambition, this accessibility, was the indirect product of their lockdown. When they started work on the new material the year before, Cox remembered the band being possessed by an existential confusion. “We were like, ‘What are we?’ Are we a pop-punk band? Are we a heavy-rock band? Are we an experimental band? Are we any good?” By the time they arrived at Stustustudio, the Brixton recording location run by producer Larry Hibbitt, they knew. “I realised that, as awful as that dark period in 2020 had been, it was also a blessing in disguise,” says Cunniff. “We’d changed labels, and we wanted to try new things, and we had this space to do something different. We weren’t exhausted from ten months on the road. These new songs felt more accessible, clearer. And Henry told me he wanted to sing more on this record, not shout or scream. So we made this heavy, heavy pop record.”

At least some of that heaviness derives from Cox’s lyrics. Channelling a lot of the frustration and alienation he was feeling during lockdown, Cox’s lyrics are cathartic but also devilishly savvy, bleakly funny. His gift for aphorism was in full flight penning these tunes, imagining himself “a cynical criminal drifting through liminal” (‘I Don’t Like People (And They Don’t Like Me)’), or growling, with appropriate edge, “They don’t want a dilettante from up north” (‘Algorithm’), or reasoning, acerbically, that “Desperate times call for desperate pleasures”, on the fearsome opening anthem ‘Carbon Mono’. “My lyrics aren’t ‘political’,” Cox says, “but they are about the alienation I began to feel from the common person on the street, an alienation magnified by the way the world has reacted to Covid and the lockdown, and the George Floyd murder… Isolation, anxiety, dread…”

As for why the group chose to record an EP rather than a full-length, they say they knew they weren’t in the right headspace yet to tackle a twelve-track album. “We didn’t know what sort of band we were, or if we would even be in a band,” says Cox. “We needed to find our bearings creatively. This EP isn’t the next chapter, but it’s like the opening to it, the introduction to it, the opening paragraph of the next page. . We know we’re going to tour a lot once the pandemic is over, and we wanted something really explosive to come out with. The next album, that could take potentially years to do – it’s the big project of our lives, we don’t want to rush it.”

The doubt, the sense that they might not reach that next album, seems absent now, and as Cox and Cunniff look back over the years their band have been together, the toil and the triumph, they know they’ve built something strong enough to withstand the challenges to come. There’s a trust, a bond between them, a chemistry that can no longer be questioned. “On the road, we’ve been literally attacked by drug addicts and strangers on multiple occasions,” marvels Cox. “And we all know that, should anything like that happen to any of us, there’s four other guys that will fight and defend us. We’ve been together so long we’ve been there for each other through lots of key events in one another’s lives – break-ups, family members dying. So I don’t think we could ever really abandon this, that we could ever be the sort of band that comes and goes with different members. We’re the sum of our parts, really.”

On Desperate Times Call For Desperate Pleasures, that sum adds up to something remarkable, a bold blast of future rock studded with hooks and honed to an emotional majesty. The start of something big, the start of the next chapter, and five of the most essential, unforgettable tunes you’ll hear all year. Their lowest ebb didn’t kill Boston Manor – listen to their new music. It’s only made them stronger. 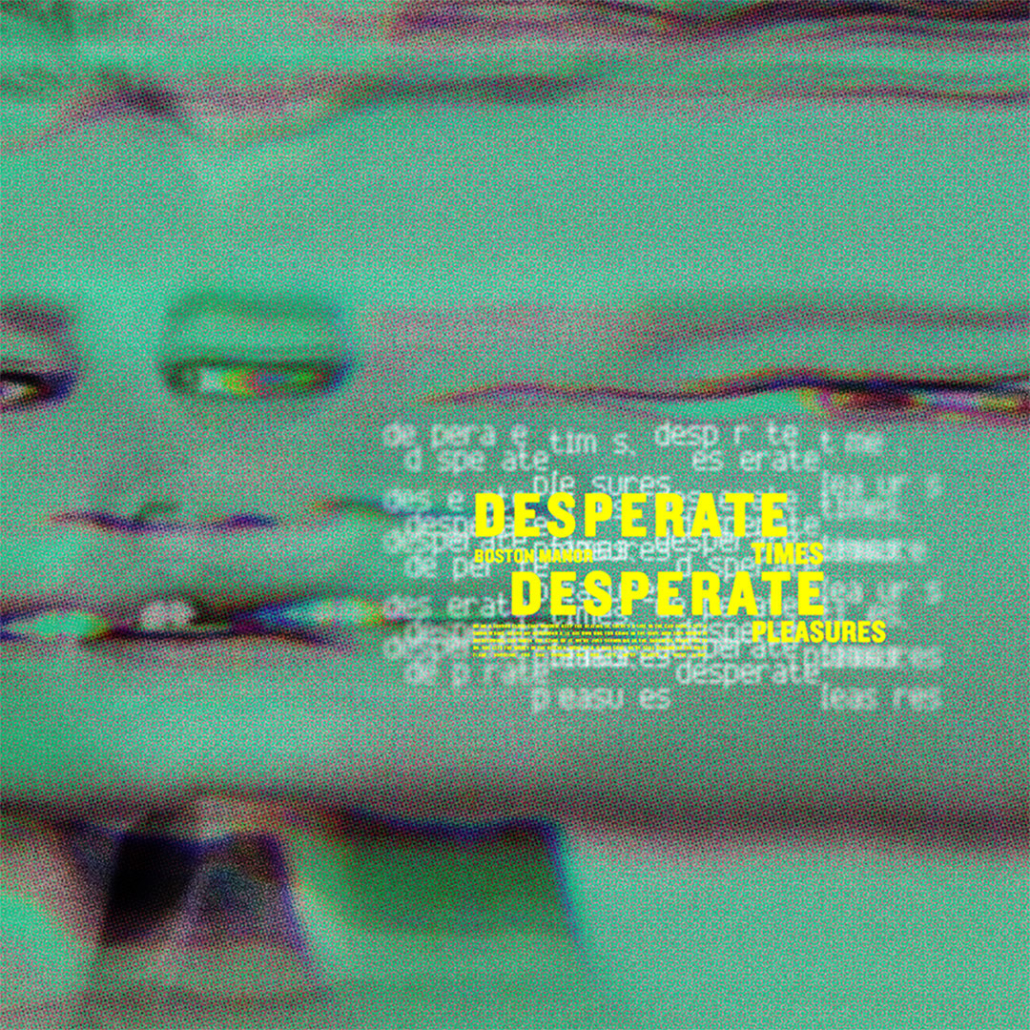