When Bring Me The Horizon decided they were going to tear things down and change things up for their sixth album, they didn’t hold back. With their last album, 2015’s That’s The Spirit, the Sheffield heavyweights went one louder, moving from the proud metalcore margins to a big, bold, balls-out, tunes-up rock album. “We set out to write an album of 11 bangers,” states frontman Oli Sykes, unabashed. “My favourite album when I was a kid was Linkin Park’s Hybrid Theory, and I thought every track on that could be a single. We wanted to do that.” It was a job emphatically done.

That’s The Spirit entered the UK charts at Number Two and cracked the Billboard album charts. Its critical and commercial success kept the five-piece on the road around the world for 18 solid months, with an added tailwind from their orchestral pitstop at the Royal Albert Hall, as immortalised in December 2016’s live album.

But by the time Sykes, guitarist Lee Malia, bassist Matt Kean, drummer Mat Nichols and keyboardist Jordan Fish limped offstage in Las Vegas in April 2017, BMTH were done. That is, bodies and heads were wrecked and a chapter was over. “We were a bit over touring by that point,” admits Fish with a rueful smile. “We were getting a bit bored of the songs. We were ready to do something a bit more creative, and to do something a bit different. “After it all settled down, when we started thinking about this album, it became apparent we’d backed ourselves into a corner on the last album,” continues Fish, who’s Sykes’ songwriting wingman. “It was Big Rock Songs, and you can only go so far with that. And when we started writing again, the stuff that sounded like it could have fit on the last album, we knew really quickly they wouldn’t be the way we wanted to take it.”

“We’d got really bored with leaning on the things that had got us successful on the past two albums,” adds Sykes. “As great as that was, there were lots of elements that were quite restricting, even down to the way I was singing. Or, I’d write lyrics on That’s The Spirit that I felt I couldn’t say then bin them – that was frustrating.”

After a few months apart, rebooting their personal lives, BMTH reconvened in autumn 2017. It was time to start what Fish describes as “a rebuilding process, and get excited again”. Easier said than done. Never less than rigorous, the band admit that it took some months before they had anything like a breakthrough song. For Sykes there was, too, a bittersweet diversion just as the writing sessions kicked off. He flew to Los Angeles to sing at the tribute concert in honour of the late Chester Benninton. It was of course an honour to be asked, but clearly not something this teenage Linkin Park obsessive had ever anticipated he’d have to do. “Linkin Park were the first gig I ever saw,” he says quietly. “And in Kerrang! the next week I could see my eyeball in the crowd. So in class at school I burst out crying! But if you could tell that kid that one day I’d on stage, singing a song in his memory – you just think, bloody hell, how did that happen? And how did I get to this point in my life? In a way. I’ve already won, ’cause our band is great, we’ve achieved loads, and I’m with my mates. But then you have something awful like that happen…” As he struggled with the writing Sykes confesses, too, to crises of confidence. Was he burnt out? Too old (at the ripe age of 31)? Too distracted? On the latter point, to be fair, his apparel company Drop Dead Clothing was going from strength to strength, with an expansion that included the opening of a bar in the company’s huge Sheffield HQ, as well as a band recording studio, The Cinnamons, named after Alan Partridge’s newbuild dream home.

Also on the last point, something less fair: the frontman had undergone a divorce, a bruising experience that would find form in some of the new album’s more emotionally trenchant lyrics. In happier news, he also found new love, and a second marriage, to Allisa. Hence the album’s title, amo, which is Portuguese for love.

Never ones to duck a challenge, BMTH pushed on. Finally, a breakthrough: Mantra.

“When we wrote that song, we knew it was the first one we were going to put out,” states Fish. “That came together in March this year, but we’d already been writing for six months at that point. And when we went into the studio in LA, we were still writing and changing songs. Loads more came. In fact, we were writing stuff for the album when we were mixing – the intro song, I Apologise If You Feel Something, actually came together in the mixing studio.” Lyrically, the hard-charging anthem that is Mantra grasps the thistle of the truth – how it will “set you free” but also “torment”.

“The lyrics came to me as I was watching that Netflix documentary Wild Wild Country about a controversial cult,” explains Sykes. “I just drew some parallels between starting a cult and starting a marriage or relationships. It can literally change your whole life – change your friends, buy property, move across the world for someone. You have to trust them unconditionally. And in that doc you’re watching these people who are still enthralled by their leader after his death, even though he betrayed them. And that is sometimes what you see in relationships. That is definitely where I was in my last marriage. This is my wife, I love her, I can’t suspect anything bad about her… “And then extending the metaphor: people just don’t want to accept the truth some times.”

The scratchy, glitchy Ouch – its drum’n’bass contours conjured in a mad 45-minute burst of inspiration and innovation – is another deeply personal song that touches on his last relationship.

“That’s probably as personal as it gets,” says Sykes. “I was really hesitant about writing that, about looking like I was wallowing in it. I’m glad [the split] happened, and I’m in a really happy place, and it takes two to tango – but at the same time it was a really painful time for me.” “Medicine is connected to that too,” adds Fish of the expansive, defiant, soulful rocker that is slated to be the third single from amo.

Taking another left turn is Nihilist Blues, an EDM-ish rave banger studded with synth stabs and vocals from Canadian electronic artist Grimes. “We’ve got a soft spot for that stuff – tacky Nineties euro-sounding club stuff!” laughs Fish. “The chorus melody in that song sounds to me like old school UK dance music – like the notes are not quite right. Oli and I like that vibe, so we just took it where it wanted to go. On the last album we’d not have dared to do that. This time we didn’t feel afraid to take it absolutely where it wanted to go.”

And, then, another left turn: Why You Gonna Kick Me When I’m Down could, almost, be grime.

Fish: “That came quite late. I made the beat ages ago and we weren’t even gonna use it. Then Oli had a meltdown-slash-breakthrough halfway through the writing process and went back to it.”

Sykes: “I played it one of my mates – all of us have got mates outside the band that we use as trusted, honest sounding boards – and when I played him that, he burst out laughing, saying it was the heaviest thing he’d ever heard. It’s not guitar-based heavy, it’s urban heavy. And his reaction made me go back the guys and say: ‘We need to finish this.’”

For the newly genre fluid band, no idea or direction was off limits. Cue the strings-drenched majesty of I Don’t Know What To Say (“our reference points when we were writing was The Verve meets Massive Attack”). And cue the ambient rock of Fresh Bruises, in which Sykes’ voice is pitched up and messed up by way of an “invaluable” little plug-in. “That’s another thing,” nods Fish. “When we’re writing we’ll always put weird little effects on, but when it comes to mixing, strip them off and go back to Oli sounding like Oli. But this time, if we like it, it stays. My favourite artist is Radiohead and they’ve always had that ambition. They’ll have song where Thom Yorke is fully autotuned and sounding like a robot, but it doesn’t matter, they can do what they want. We admire that commitment to go through with an idea with complete conviction.”

Is this, then, BMTH’s Kid A? Crazier things have been said. Certainly the spirit of adventure, of rule-breaking and history-scorching, is here in spades. In the bold corner stands another guest, human beat machine and Björk collaborator Rahzel, bringing his special set of skills to bear on the throbbing, shape-shifting Heavy Metal. And in the none-more-black corner stands Dani Filth, who makes his distinctive presence felt on the mighty Wonderful Life – a song that’s never less than heavy-as-fck, not least when the sound of cranked up brass kicks in.

His contribution, says Sykes, makes an important point. For sure, BMTH are moving into the future, “but we certainly don’t hate our past or are embarrassed about being a metal band. It’s not that at all. It’s just that we don’t identify with it so much today. It’s just so far removed from where we are now. I still love that sound.”

For sure it’s a different time, and this is the punchily different sound of a different band: on amo, BMTH are reborn, rebooted and ready to smash it all over again.  As much is evident from the album’s opening notes. The minimal, electro-hymnal I Apologise If You Feel Something, was intentionally written as the opener, as an overture to lead into Mantra. Oli Skyes: “It’s saying: whatever you might think or imagine about this album, don’t make up your mind until you’ve listened to it from start to finish. It’s not just heavy songs, it’s not just commercial hits, it’s not just mad electronic music, it’s not a full-on art piece – it’s got bits of all of that.”

Jordan Fish: “The best thing about it is, all of those things are our taste – we like all of that, from pop to artsy-fartsy stuff.” “We don’t want you to be able to pot your finger on this record,” concludes Skykes. “It’s not our arty record, or our record for the charts. No, we like all music. Apart from maybe country…”

An idea for BMTH LP #7? As amo emphatically and brilliantly proves, Bring Me The Horizon never say never to anything. 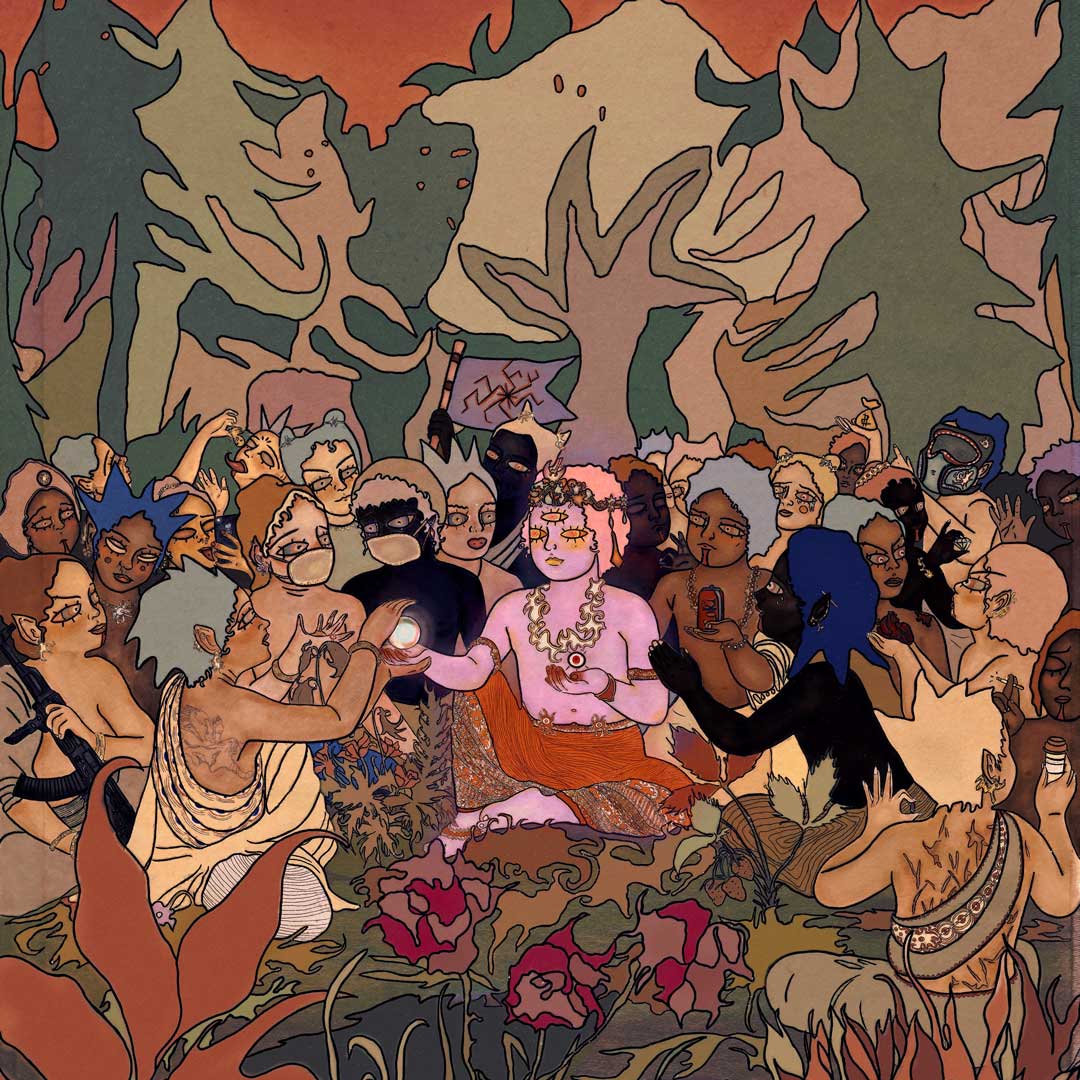