Ultra-prolific composer, guitarist, and producer Omar Rodríguez-López was born in Bayamón, Puerto Rico, in 1975. He spent his formative years in South Carolina and El Paso, Texas, setting up camp in the latter and forming the hardcore band Startled Calf at the age of 15. He joined post-hardcore outfit At the Drive-In in 1993, a gig that lasted until the band broke up at the peak of its popularity in 2001.

Rodriguez-Lopez formed the Mars Volta the following year, as well as an instrumental side project called the Omar Rodriguez-Lopez Quintet. He composed the soundtrack to Jorge Hernandez Aldana’s El Búfalo de la Noche in 2005 and has released four solo albums — 2004’s Manual Dexterity: Soundtrack, Vol. 1, the eponymous Omar Rodriguez in 2006, and Se Dice Bisonte, No Bufalo and The Apocalypse Inside of an Orange, both in 2007.

Rodriguez-Lopez would continue his double releases in 2008 with Calibration and Omar Rodriguez-Lopez and Jeremy Michael Ward, a collaborative effort that was recorded prior to the formation of Mars Volta. Old Money, Megaritual, Despair, and Xenophanes (which was sung completely in Spanish by Rodriguez-Lopez and his duet partner, the Mexican singer/songwriter Ximena Sariñana) all followed in 2009. The guitarist and composer continued his brisk release pace in 2010 with Solar Gambling, Cizaña de los Amores and Tychozorente, and the following year saw even more new material come to light.

In 2012, after the death of his mother, Rodriguez-Lopez decided to put the brakes on his busy solo career and begin collaborating again. He founded experimental art-rockers Bosnian Rainbows with ex-Mars Volta member Deantoni Parks, Le Butcherettes vocalist Teri Gender Bender, and keyboardist Nicci Kasper, and released an eponymous album with the group in 2013.

He also started the more rock-oriented Antemasque alongside longtime collaborator Cedric Bixler-Zavala and a rotating cast of players that included Flea, Travis Barker, Marfred Rodriguez-Lopez, and Dave Elitch. Antemasque issued their eponymous debalbum in 2014. 2016 proved to be another busy year, with Antemasque issuing their second full-length outing, Saddle on the Atom Bomb, a reunion tour with At the Drive-In, and a new relationship with Ipecac that saw Rodriguez- Lopez clearing his solo vaults and releasing an album bi-weekly through the end of the year.

In 2019 Omar collaborated with Ernie Ball/Musicman for the launch of his signature ‘Mariposa’ series of Elecric Guitars. 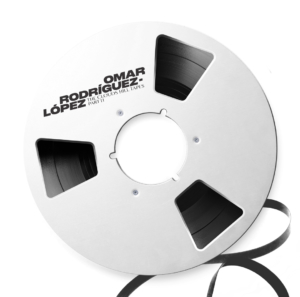