Confusion. Chaos. Misdirection. Manipulation. The fall of old orders, the rise of new ones. Unpredictability walking the street as freedom lies beaten in the gutter. These are weird times, discomforting times. The perfect times for Turbowolf.

With their stunning third album, The Free Life, Turbowolf have delivered a masterpiece for this fractured era. Across its 11 stellar tracks, these four Bristol mavericks – Chris Georgiadis (vocals/synthesisers), Andy Ghosh (guitar), Lianna Lee Davies (bass) and Blake Davis (drums) – push back the boundaries of music with ambition in their heads and disruption in their hearts.

“Guitar music has become one of the safest and most predictable genres around,” says Andy Ghosh. “It’s been going on like that for so long now that people have actually forgotten the whole point of rock’n’roll was to be dangerous and scary and unpredictable. Things are stale and boring. We’re trying to shake things up and make them interesting again.”

However you want to measure it, they’ve succeeded. Produced by the band themselves and mixed by longtime associate Tom Dalgety (“Our spiritual guide, our God,” says Andy), The Free Life harnesses the insanity crackling through the air right now, distilling it into a set of songs that veer gloriously between the anthemic and the gritty, the psychedelic and the pop, the unhinged and the profound.

Electrifying new tracks such as ‘No, No, No’, ‘Capital X’, ‘Last Three Words’ and the explosive title song don’t so much bend the rules as throw them out of the window into the trash below. On The Free Life, Turbowolf have brought together the pure garage-punk spirit of their 2011 self-titled debut album with the kaleidoscopic sound and heightened ambition of the follow-up, 2015’s Two Hands.

“We tried to go back to how we used to write songs at the start, when there was no chance of getting played on the radio,” says Andy. “But also, we tried to make it the strangest album we’ve ever made. The only attitude was to embrace the strange, to not shy away from anything that seemed a bit wrong. If it sounded good, it’s going in.”

“The whole point is to push boundaries and see how you can fuck with things, musically,” adds Chris. “Do things the wrong way on purpose. That’s the spirit of punk rock. The attitude of this is pure punk rock – we do it our way, so even if we do it the wrong way it’s the right way.”

In an age of disposable consumerism and artless ‘art’, The Free Life is a scarce commodity: an album that was carefully designed and sculpted, built up and torn apart and built up again over a period of months and years. It was conceived after a period of what Chris calls “tour-induced madness” that followed Two Hands.

“We went into hiding and lost our minds,” says the singer. “Isolation followed by concentration seems to be the way we end up working.”

The band constructed a studio in the front room of Chris’s flat. Amps were piled to the ceiling on one side, synthesisers and pedals on the other. In the middle was where the band worked their alchemy, turning the lead of the raw materials into the gold of finished songs. But there was a method to their madness beyond just annoying the neighbours.

“It was very intensive,” adds Chris. “You can never rest. You can always do more or chip away at what you’ve got.”

This DIY arrangement was perfectly suited to a group who see themselves, first and foremost, as a punk band. That’s not “punk” in the sanitised, neatly-packaged modern sense. No, it’s punk in the original, anything-goes spirit of the movement.

“In our minds, we’re absolutely a punk band, 100 per cent,” says Andy. “The fact that there’s a psychedelic element in it makes us even more so. Because that’s not what punk bands do, on paper. To not do what a punk band is meant to do, that’s another level of punk.”

But Turbowolf are way more than the sum of their parts. Like scientists of the senses, The Free Life is the work of a band who have loaded their own Large Hadron Collider with a kaleidoscopic arsenal of sounds and ideas and hit the ‘on’ button. Pyschedelia smashes into punk, pop crashes into metal. Previously unknown sounds emerge. New musical universes spring into existence.

The pneumatic intensity of ‘No, No, No’ gives way to an epic chorus and chilly synths. ‘Last Three Clues’ jumps effortlessly between low-end intensity and futuristic space disco. The song ‘The Free Life’ itself begins as an ominous industrial-metal stomp, only to mutate into a light-speed punk rock thrash that then blossoms into an arena-filling chorus. The one common thread is Turbowolf themselves.

“From the beginning, we decided not to worry about what genre we’re meant to be and just did whatever we wanted,” says Chris. “Just because we have these huge, heavy, fuzzy guitars doesn’t mean we’re not going to have a synthesiser.”

“Some songs have a chorus that’s pure pop,” says Andy, “but done in a noisy, disgusting way. In other songs, you don’t even know what the chorus is. Art and music should be on the edge. The challenge is to find those pockets of interesting, strange new things that you can do with it.”

Chris: “But we also want to make it listenable. We want to sneak into your home, into your ears. You’ll be listening and thinking ‘This is a great rock song’, then you’ll realise, actually, there’s more to it than this.”

This bravado approach extends to the album’s lyrics. The Free Life isn’t a concept album, or even a set of songs linked by an overarching theme, but subconscious connections light up hidden pathways, with enigmatic patterns and shapes gradually revealing themselves over time.

“There’s a lot about confusion and misdirection in terms of how society is played, how people are played, how the world is played,” says Chris. “It pays for people to not know who the enemy is. Or even if there is an enemy. Or who to fight. Or how to fight.”

The album title revels in its own ambiguity. You can read it how you want to read it. Like so much in Turbowolf’s world, there’s no right or wrong answer.

“The title ‘The Free Life’ has a few different angles,” says Chris. “There’s the idea of freedom in the modern western world, which is often an illusion. There’s also the idea of things being free in monetary terms. And the fictional, perfect, free life that people aspire to living. It could mean any of those. Or all of them. Or none. I like ambiguity. It lets the listener go on a bit of a journey. In the process of someone trying to puzzle out the meaning of the song, they might puzzle out other things – even in their own life, things they might be considering.”

“The album definitely has an air of what’s happening in the world at the moment,” adds Andy. “We live in such strange times.”

One thing that there’s no mystery about is the array of guest musicians and kindred spirits who feature on The Free Life. The album’s opening track ‘No, No, No’ begins with an intonation of intent from Joe Talbot of fellow Bristol band Idles, who also appears on ‘Capitol X’. Sebastian Grainger of Death From Above adds vocals to the 31st century robo-rock of Cheap Magic, Mike Kerr of Royal Blood trades lines with Chris amid the loose-wire aural pyrotechnics of Domino, while Chantal Brown of acclaimed psyche-metallers Vodun appears throughout the album, not least on the wall-of-psychedelic-noise ‘Very Bad’. Why broaden out their world? Because they can.

“These people are our friends, which means it’s fun,” says Andy. “And texturally, it’s interesting. It adds extra dimension. And when we play live they can come and play with us if they’re about. If you’re at a festival, you can go, ‘Come and play that song live.’”

Nodding to the great albums that inspired them growing up, The Free Life is designed as a self-contained body of work, designed to take anyone who immerses themselves in it on a ride from the opening track ‘No, No, No’, to the stripped-back final track ‘Concluder’.

“We think about the album as a whole rather than individual songs,” says Chris. “It’s made to be listened to from the start to the end. It’s about ebb and flow and degrees of intensity. Some songs we might do one thing with, then another song we’ll do another thing. But then none of the songs are going to suffer if they’re listened to in isolation. They’re still going to work. It gives people an option – it could be a cool journey, or people could pick them out and do what they want with them.”

This holistic approach extends to the artwork. As with every Turbowolf album, single and T-shirt, The Free Life’s striking, enigmatic cover was designed by Andy. “Nothing’s outsourced,” he says. “That’s important to us. We speak to other bands and they say, ‘Oh, the label gave the sleeve to someone to design.’ How can you do that? It all ties in together.”

Uniquely, The Free Life itself was designed as a pure listening experience, a transcendent, transportative journey with its own twists, turns and hidden doorways. Live, these songs are designed to take on lives of their own, utterly independent from their recorded incarnations.

“That’s the special thing that happens when you play live,” adds Chris. “That energy in the room is something ethereal. You can never capture that on record, and nor should you.”

As well as their new album, 2018 marks another anniversary for Turbowolf . The Free Life comes exactly 10 years after the release of Turbowolf’s debut single, ‘Bite Me Like A Dog’ – a decade that has seen them carve out a unique place in the British music scene.

“It’s been a pure creative experiment,” says Adam. “We don’t see this a band among every other band, we view it as a project to see what we can do within the realm of rock music, at this saturated point where everything sounds the same. It’s been a journey of experimentation.”

The Free Life is the latest stop-off on Turbowolf’s twisted, wild journey. As the world is battered by the winds of chaos, it’s reassuring that they alone stand strong. 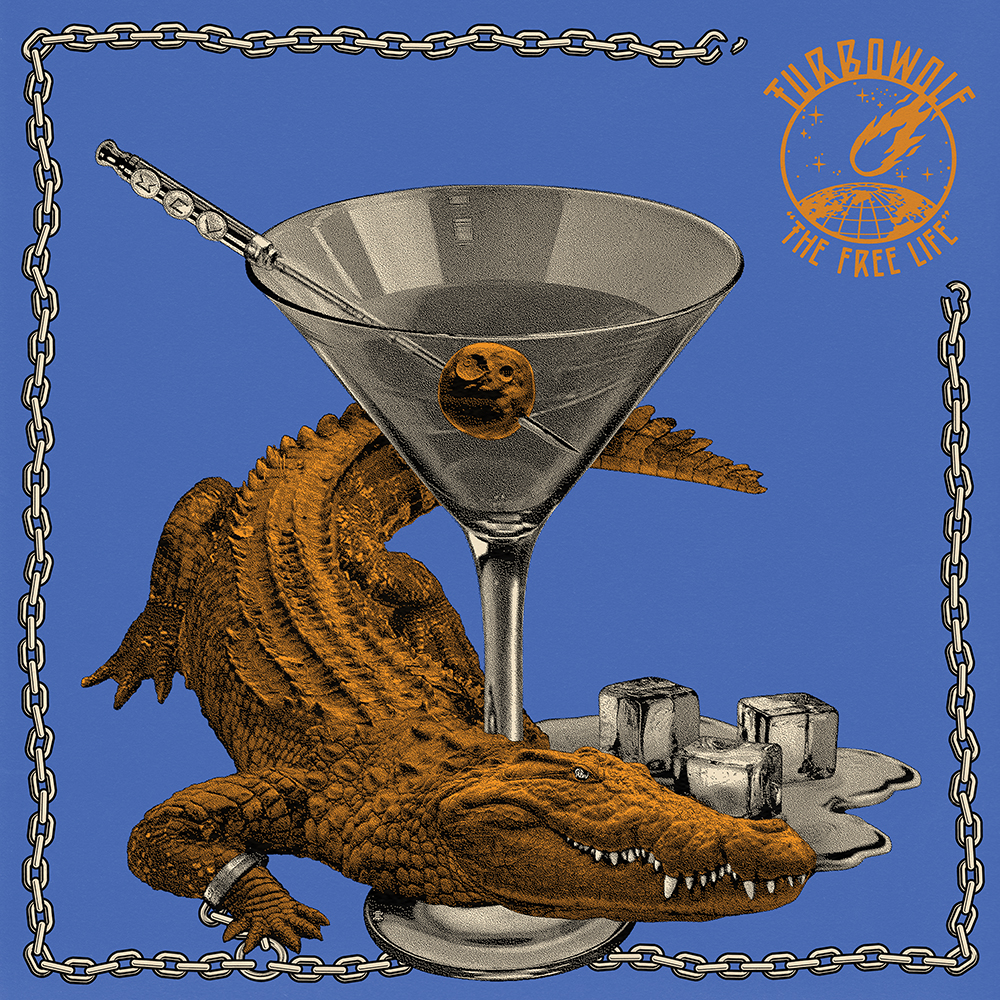